The project Spacial Perception in the Trinational Agglomeration of Basel is a co-operation between the University of Basel and the FHNW and connected to the Pro Helvetia program Triptic – Kulturausstausch am Oberrhein (Cultural exchange in the Upper Rhine area). In two interdisciplinary teaching projects from 2013–14 different kinds of border crossing and spatial practices in the trinational area have been examined. The everyday life, routines, perception, experiences, connecting and separating phenomena were in the focus of the artistic-scientific research. The students of the Academy of Art and Design and of the Department of Cultural Anthropology and European Ethnology have collaboratively conducted research and thereby tested and generated (new) forms of knowledge. Transgressing disciplinary boundaries they took unknown paths of interdisciplinary collaboration using media like video, photography, sound, text, drawing etc.
Public presentations are foreseen during 2014 in various exhibition spaces in the region. A follow-up teaching project in winter semester 2014/15 will be conducted in collaboration with the Museum der Kulturen Basel to develop the topics further with the aim to include the arising projects into their permanent exhibition StrohGold.

Listen to an extended radio feature on the project (German). Flavia Caviezel and Ina Dietzsch talk about its background, the works developed by the students and the belonging exhibition “Hacking the boundaries”. Aired on “Freies Radio Wiesental” the 26th of June 2014.

The following student projects have been realised in 2013/14:

This sound feature describes the world of excessive consumption in a German shopping mall that is seen by people from France and Switzerland explicitly with the aim to purchase cheaper goods. The sound essay explores the atmosphere only by the means of sound, blinding out visual impressions that are usually very dominant in the context of shopping. Audio-Impressions have been written down and transformed by reading out them against the background of two ubiquitous noises: the repetitive peep of the cashiers and the rattle of hundreds of rolling baskets.

Not too long ago the phone was part of a private environment. With the new mobile technologies this has changed profoundly. Phone conversations more and more become part of public spaces. What kind of impact does this have for the society? Tanja Weidmann interviews commuters with a catalogue of questions and creates a sound feature using the answers in a very fragmentary way.
The resulting soundscapes are installed in a replica of a public phone box. Passers-by can listen to them when approaching the phone box closely.

Using a collection of statements and photographs, which are out of context, the project addresses stories about the border. The complete reception of the project depends on an active visitor. With his/her association, the visitor builds a bridge between sound and image, and also between the own perception of the border and those, which are presented.

A revolving door as a metaphor for our perception of borders and boundaries is the centre of this video: permeable at the one moment and hermetically closed at the other. For some people a border is not perceivable as border, for other people it is strictly forbidden to cross it.

The basic issue of our project is the perception of national borders between Germany, France and Switzerland by using mobile technology. With the help of mobile phones we wanted to find answers to the following questions: Is the border crossing noticeable to commuters who cross it on a daily basis? Are there any differences or similarities between the different national borders? The project presents the border in a visual, auditory and individual way by installing pictures taken by our interlocutors during one day, mapped according to train and car rides crossing the border, and fragments of the interviews about individual habits of using mobile phones.

Border – a word, a part of the trinational space, a geographic or constructional reality? Inspired by the quotation of Stefano Boeri (2003) we ask questions about what we might discover alongside a national border. What kind of borders, blurring, overlays and intersections can we perceive with a sharp eye? By presenting a panorama we aim to undermine the linearity of national borders. In a juxtaposition of the same pictures within different succession center and periphery occur at different points. The composition of the panorama changes the perception of the border space. The gaze can be sharpened and the border can be seen from all sides

What to do with rubbish? Giving it away? Salvaging? Making use of it, reselling or throwing away? These decisions are very subjectively made and valued. It is not the same thing to throw a sweater away or to pass it to the Red Cross. Both practices are valued differently. There is also a difference between affective and monetary values. Children’s clothes have a great affective value to a mother even if they have no monetary value anymore. The game presented here is about different ways of disposing things and valuing “garbage” or “rubbish”. Players can gain monetary money and goodwill money. The winner is the one who gains most of both categories.

The bridal gown in the context of Turkish weddings
by Kim Bollag (drawings: ink, gouache)

My leporello engages with the understanding of fashion by Turkish diaspora women. The leporello contains drawings of a variety of dresses corresponding to one basic dress that always has the same shape (therefore the proportions and the position in the image are always the same). By doing so it visually indicates the serial nature of the clothes. The story line starts with a stereotype image (pompous dress) and ends with an unusual image (casual wear). The drawings are composed with single quotes from interviews to show the diversity of taste and patterns relating to a certain generation. Basically the quotes show individuality dealing with taste, the graphical and uniform representation shows seriality.

Object of my research is the aesthetics of garbage between Lörrach – Basel – St. Louis. At each of the places there are different rules and regulations for waste management, how to keep streets clean and well tended. Also the design of waste containers and all other types of waste bins differs significantly. The aim of this research is to explore how exactly waste management works at these places and what the specific aesthetic means of representation and design of waste containers and recycling stations are. What kind of rules and regulations for waste management are people supposed to follow at different places in different countries? What do streets, waste containers, bins and the recycling stations look like in each region? What are the particular practices of their use?

Button, button, who’s got the button? – The project is based on a trading game, in which one item is traded on constantly in exchange for another. The research was conducted in the immediate vicinity of a border crossing, the aim being to record the items’ stories, as well as personal “borderline experiences”. In order to capture the trinational dimensions of these experiences filming took place in the tri-border area of Switzerland, France, and Germany.

Seriality is the (not only aesthetical) ordering principle making the production of Turkish weddings move smoothly. The economisation of the wedding vow – reflecting the structures of mutual material and familial dependencies all too present in the Turkish diaspora – is consistent with the logic of large scale production underlying the organisation and hosting of such festivities.
Actualized weekend after weekend in yet another marriage to partake and embodied in an enormous number of guests, gifts and food, the weddings evoke under a surface of glamour and happiness a feeling referring to assembly line production.
The project shows the ambiguity between this production process and the bridal dream, working out the complex and the multi-layered attempts of coming to terms with the varied experiences of belonging to/being foreign to a cultural practise re-invented in a trinational setting.

Who is not shocked about the quantities of food thrown away?
Yannetta Meshesha decided to make an animated film that tells the story of trinational food waste and containering as a counter strategy. She wants to raise awareness about the topic and asks: What can we do against food waste? What to do with leftovers? And is containering (il)legal?

A yellow line is drawn on the floor across the room, deviding it in two spaces. You can stand on either side. Voices, a narration, coming from two sides. Experiences, observations from fieldwork, fictional stories, research material, a collection of quotations and theoretical thinking – all mixed up, all of them concerned with the symbolic and material dimensions of borders. They create a spaces within the space. For a short moment orientation is lost. Where are we? Here or there? Is there a border? And if so, how do poeple perceive this border? 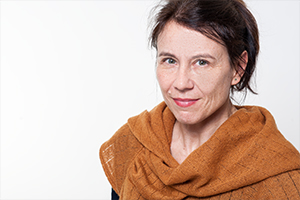 Do you believe what you see?
Student exhibition at Museum der Kulturen Basel
Hacking the Boundaries
An exhibition of student works of the interdisciplinary teaching project Spacial Perception….