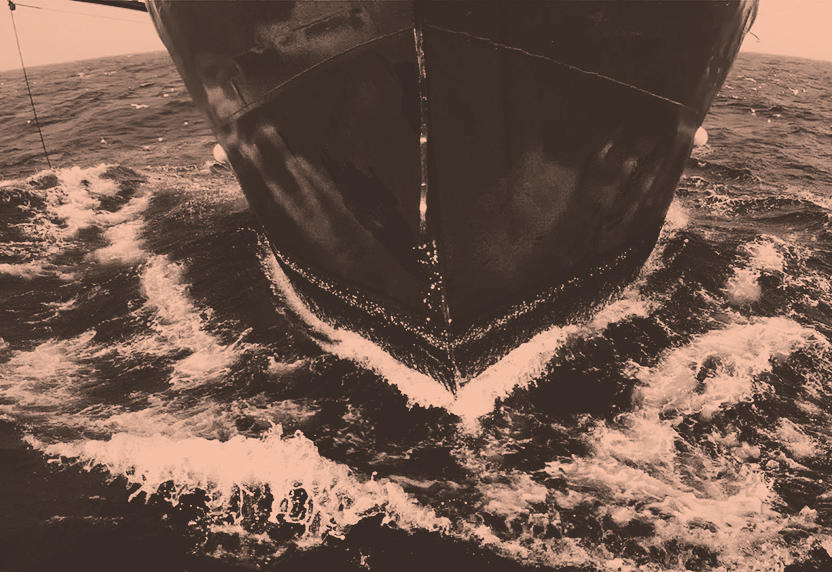 The final session of this term’s Critical Media Lab Colloquium will take place, Wednesday, the 17th of December from 4:15 to 6:00 PM at the Studio Cinema (ground floor of the tower building).

For the seventh episode of our first Critical Media Lab colloquium series — What Constitutes Critique? — we host a session with Johannes Bruder and Flavia Caviezel.

With the fish-eye cameras strapped to their heads, the film-makers and crew recorded the raging midnight seas from which are hauled the fish and scallops that will end up on china plates and linen tablecloths in smart restaurants. Remorselessly, they expose every aspect of this visceral business – often conducted in the dark, out of sight of land, on trips lasting up to 18 days. It is a weird otherworld, filled with bug-eyed fish slathering over the decks, clanking rusty chains and hooded figures like medieval torturers, all perpetually doused by the rising Atlantic.

Shrieking gulls plunge up from the dawn-slashed sky in vertiginous, inverted scenes as the cameras tumble upside-down. Starfish float beneath the surface like coral-coloured confetti. On deck, scarred, tattooed men eviscerate fish dragged up from the depths. In one shocking sequence, a skate dangles from a chain as its wings, the only edible parts, are excised – a scene not far from the notorious trade in definned sharks. Meanwhile, an indeterminate heavy-metal track grinds out from a radio, sounding more like the knell of an aquatic apocalypse.

(From Philip Hoare, Leviathan: the film that lays bare the apocalyptic world of fishing, The Guardian, 18 Nov 2013)

Philip Hoare’s almost lyrical description of Verena Paravel and Lucien Castaing-Taylor’s filmic effort Leviathan (2012) represents but one way of attempting to translate a sensory experience into words, an attempt to capture on paper what would normally escape the linear format of written word. A classic ethnographic move, as it were. However, Leviathan represents an ethnography itself, but it escapes the format of classic ethnography at the same time.

Developed in the realm of Anthropology, ethnography has primarily been using words for the transmission of experience, to offer detailed descriptions of strange worlds to the “unexperienced” reader. Paravel and Castaing-Taylor, by contrast, used 12 GoPro Cameras to compile an audiovisual document of their journey northeasterly out of the world’s former whaling capital, New Bedford, Massachusetts, to the North Atlantic’s most fruitful fishing grounds. Strong references to Arthouse film can be interpreted as a technique to capture what is “somewhere between both consciousness and unconscious dreamworlds” and make “unassumingly clear […] that whatever we have known of work at sea is partial” (Snyder, Leviathan, Visual Anthropology Review 29, 2, Fall 2013, 176). In a way, Hoare’s description therefore represents an attempt at relegate Leviathan into classic anthropological and ethnographic territory; it might also be an attempt to win Paravel and Castaing-Taylor back for the discipline they have gradually abandoned:

Leviathan will be screened in the context of ixdm’s colloquium on criticality. We think of it as a form of criticism that transcends deconstruction and represents a diffractive perspective on everyday phenomena. Diffraction – in physics referring to various phenomena which occur when a wave encounters an obstacle or a slit – is meant to disrupt linear and fixed causalities and to work towards more promising interference patterns. It offers the possibility to “re-pattern the world” and overcomes a “limiting reflectionist attitude of criticality” (Karen Barad, Intra-active Entanglements, Kvinder, Kon & Forskning Nr. 1-2, 2012, 16) by demanding the reader’s/viewer’s imagination. If film is thought of as a document that “not just describes, but depicts”, as Castaing-Taylor states (Snyder 179), to which extent can it help experience economic, social and ecological conditions in a diffractive fashion? How far, in other words, can and should we go in blurring our perception to see clearly?