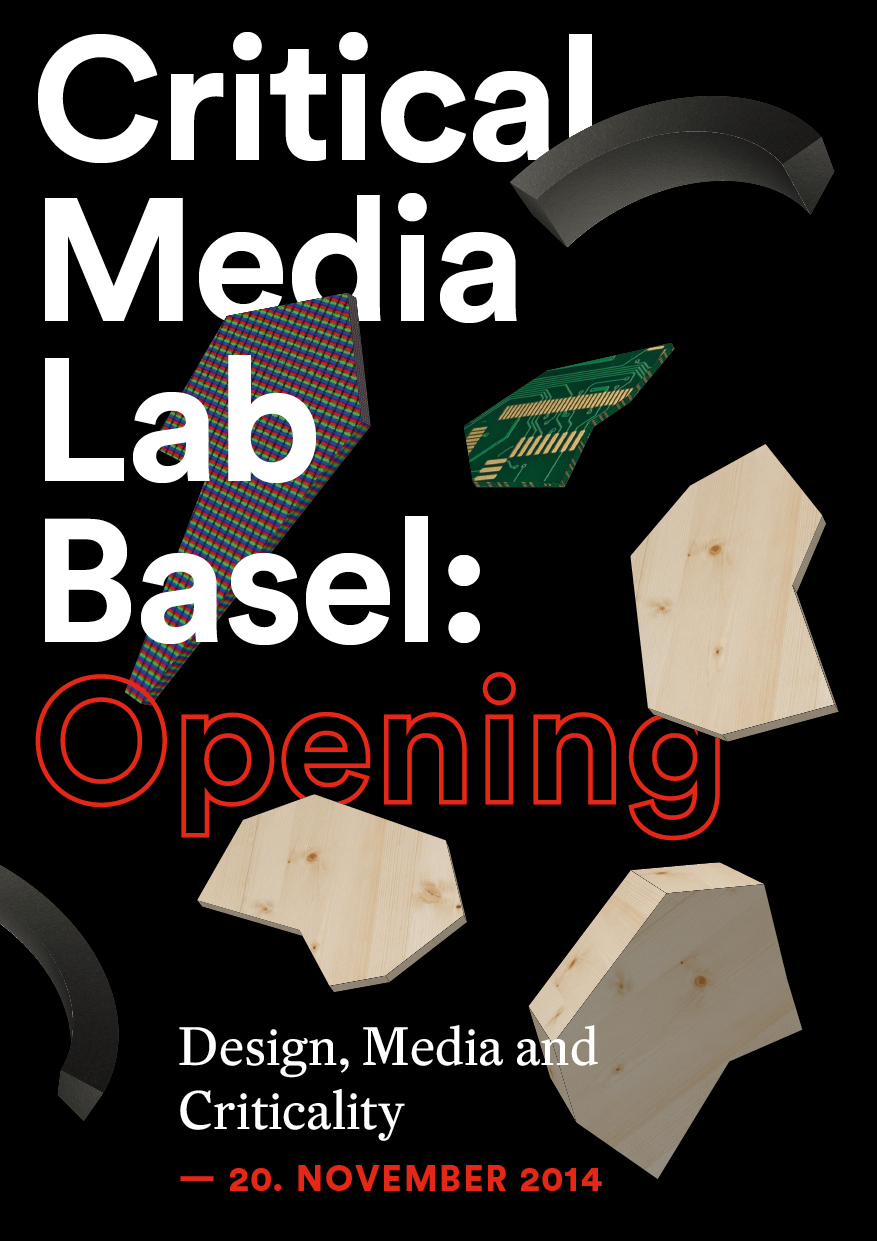 We are happy to invite you to the opening of the Critical Media Lab Basel. The lab is an integral part of the Institute of Experimental Design and Media Cultures (ixdm) at the Academy of Art and Design FHNW Basel. We celebrate the opening on Thursday, 20th November 2014 with scholarly and artistic presentations, discussions and sound performances all arranged around the topic of „Design, Media and Criticality“.

About the Critical Media Lab

Located within the new Campus of the Arts at the Academy of Art and Design FHNW Basel the Critical Media Lab is a vibrant, international hub for historically and contextually engaged critical design and media practices. A group of media artists, design researchers and scholars from the fields of cultural, media and social studies operates under the direction of Prof. Dr. Claudia Mareis and conducts highly innovative, interdisciplinary research projects at the crossroads of design, media arts, science and technology. Outputs include publications, lectures, as well as public-facing artefacts and exhibition designs. Concurrently the Critical Media Lab is developing a set of contemporary and pioneering research methods through pro­jects supported by the Swiss National Science Foundation (SNSF) and the Comission for Technology and Innovation (CTI). These methods include practice-based research through critically reconstituting, restoring and examining historical techno­logies, the technology-based sensibilisation for algorithms and imperceptible media signals, and steering public discourse towards media technological issues through artistic and designerly practice. The recently established lab facility at the new campus provides a space and up-to-date media technologies supporting our projects.

For the opening event the US-American media and design historian Prof. Dr. Orit Halpern (The New School/Parsons The New School for Design) will give a keynote on cybernetics, postwar design and intelligence. Artist and activist Gordan Savičić, one of the founders of „Critical Engineering“, and the renowned Swiss-based artist group !Mediengruppe Bitnik will present their projects and works at the crossroads of and oscillating between art, design, technology and criticality. The opening culminates in a sound performance by the Swiss-based sound artist Iris Rennert and a short 8-bit music session by local DJ STU from Micromusic Basel.

About the guests
Orit Halpern is an assistant professor in history at the New School and member of the new Design MA program at Parsons School of Design. Orit’s research interests include histories of digital media and cybernetics, tackled from cultural and social science perspectives and exemplified in art and design projects. Her forthcoming book, titled „Beautiful Data: A History of Vision and Reason since 1945“ (Duke University Press) constructs a history of „big data“ and maps contemporary obsessions with storage and interactivity in digital systems to previous modernist concerns with temporality, representation, and archiving. She completed her PhD in History of Science at Harvard University (2006). Fellowships at the Max Planck Institute for the History of Science in Berlin and at the Di­gi­tal Cul­tu­res Re­se­arch Lab of Leuphana University of Lüneburg.

Gordan Savičić is an artist fascinated by issues of our contemporary existence caused by the effects of new media on subjectivity and its deep social implications. He is currently based in Lausanne and holds a BA in Digital Art and New Media from University of Applied Arts Vienna and an MA from the Piet Zwart Institute Rotterdam. Gordan has been teaching media art practices at various schools and universities such as the Piet Zwart Institute, Gerrit Rietveld Academy, Zurich University of the Arts, University of Applied Arts Vienna and HEAD Geneva. His works, collaborative projects and performances have been shown in festivals and institutions such as Transmediale, Arco Madrid, IRCAM, V2 as well as HeK in Basel.

!Mediengruppe Bitnik live and work in Zurich and London. Using hacking as an artistic strategy, their works re-context­ualise the familiar to allow for new readings of established structures and mechanisms. One of the projects represented an intervention into Londons surveillance space by hijacking CCTV cameras and replacing the video images with an invitation to play chess. In early 2013 the group sent a parcel to Wikileaks founder Julian Assange at the Ecuadorian embassy. The parcel contained a camera which broadcasted its journey through the postal system live on the internet. They call this work a system_test and a live mail art piece.

Iris Rennert is a sound and media artist. She is teaching media art at Bern University of the Arts. Iris is developing and conducting projects on Circuit Bending and Hardware Hacking as well as artistic research on sonification.

STU is a Basel-based chiptune composer (on the Atari ST), producer and DJ. He is an active member of „Drop da Bomb“ (founded 1997) and the „Micromusic“ movement.

The entrance is free, although places are limited.

How to get here

From Basel central station (Basel SBB) take tram 11 (direction to Aesch) until Ruchfeld. The tram stop is directly in front of the building. Take the lift to the 3rd floor.