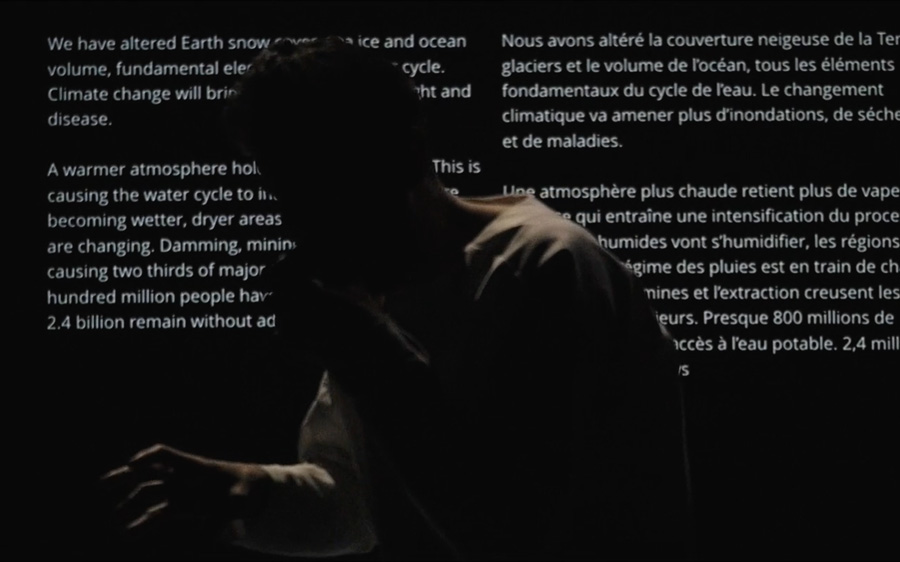 Matters (by Duncan Evennou, Clémence Hallé and Benoît Verjat) is a solo performance which, in a polyphonic assemblage, gives form and body to the archives of the inaugural meeting of the Anthropocene Working Group, which took place on Friday 17 October 2014 at 9:00 am, on the stage of the Haus der Kulturen der Welt, in Berlin.

The geological hypothesis, increasingly heard in the world of the arts, situates the consequences of human impacts on the environment in the depths of terrestrial time. In Matters, the actor situates and then transforms the historical, scientific and political voices of the members of the group, playing with the sensitivity of their words, and shifting from their narratives to their hesitations, their silences or their mockery. He makes light of the frictions of thinking that occur when the sciences get up on stage.

Between the interstices of an increasingly disrupted performance, we begin to see cracks appear in the prevailing political discourse on the end of the world, helpless in the face of the long, non-human representations of time that we are called upon to imagine by geologists . Yet it is only the end of a world. Do we hear other worlds emerging from the hectic din of sciences confused by the urgent need to act?

Matters is meant to be a trilogy. For the presentation and discussion at the Critical Media Lab, I would like to introduce Matters 2, a future non-human, quasi-autonomous, electomagnetic performance about the Technosphere this time, following closely the Haus der Kulturen der Welt’s Anthropocene Project curatorial history. After a short presentation of my thesis and my practice, we open a discussion on how to translate theoretical texts in theatrical (or any form of artistic) apparatus. I will prepare some of those texts and would also be enthusiastic to receive other suggestions from the people in the room if they wish, in order to spend some collective time to speculate on the many ways to break the neck of the Technosphere concept.

Clémence Hallé is a doctoral student at the École Normale Supérieure in the Sciences, Arts, Creation, Research department. Her thesis is on the aesthetic and environmental history of the Anthropocene. She is continuing the research into ecological representation that she began with SPEAP as her field of study. She notably wrote a report on an advance simulation of COP21 at the Théâtre Nanterre-Amandiers, Paris Climat 2015: Make it Work, in the form of a play, with SPEAP illustrator Anne-Sophie Milon.